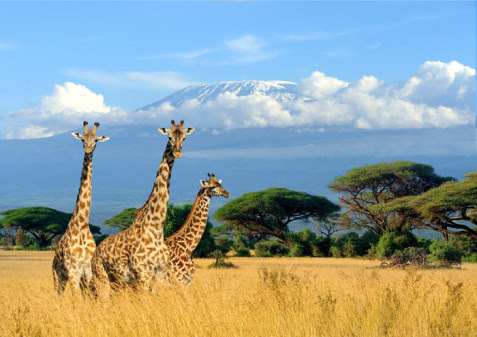 Africa is distinctively unique continent among all 7 continents of the world. It has a very diverse culture.

These interesting facts about Africa are must to be known.

Interesting facts about Africa
1. Africa is the second-largest continent in the world both in size and population.

2. Islam is the dominant religion in Africa. Christianity is the second. Arabic is also the most widely-spoken language in Africa.

3. Africa has the shortest coastline despite being the second largest continent in the world.

4. Africa is the most centrally located continent in the world. Both the prime meridian (0 degrees longitude), and the equator (0 degrees latitude) cut across it.

5. Nigeria has the highest population (154.7 million people) in Africa. This represents 18% of Africa’s total population.

6. Both the world’s tallest and largest land animals both come from Africa. They are the giraffe and African elephant, respectively.

7. Around 2,000 different languages are spoken in Africa and each of them have different dialects while Arabic is the language that is most widely spoken in the African continent.

8. The world’s longest river — the Nile — and the world’s largest desert — the Sahara — both are home in Africa.

9. Algeria is the biggest country in Africa by land area.

11. The continents terrain was inhabitable and remained unknown for thousands of years, earning it the name of ‘Dark Continent’.

12. The equator passes through the middle of the Dark Continent and it receives direct sunlight throughout the year.

14. The largest waterfall in Africa is the Victoria Falls and it is located on the Zimbabwe and Zambia border. It has a height of 355 feet and the width of the water fall runs into almost a mile.

15. More than 50% of the world’s French-speaking population lives here on the continent.

17. Africa has a pink lake in Senegal.

18. Africa is the hottest continent on earth.

Related Topics:Africa
Up Next

How to confess your love to your best friend

Three colours you should never use in your house