Somizi has been really secret about his love life even though he has been suspected to be having a secret relationship.

However, with the rumors going on, the star is yet to reveal who is dating but it looks like it’s not the person everybody thought.

Recently, the actor shared a nude picture of himself that set the internet ablaze.

But as many were having fun with the image, some noticed that the photographer was Vusi Nova.

Although they have been best friends for quiet sometime now but many are not comfortable with it.

The fact that Vusi took a nude picture of Somizi seemed to fuel the rumours that they were together, as everyone wondered what level of “friendship” it takes to see each other completely naked.

According to Musa, the two were seen kissing at Ayepyep Lifestyle Lounge during new year celebrations, and have further been rumoured to be staying in the same villa in Llandudno, where the celebrity chef is now vacationing. 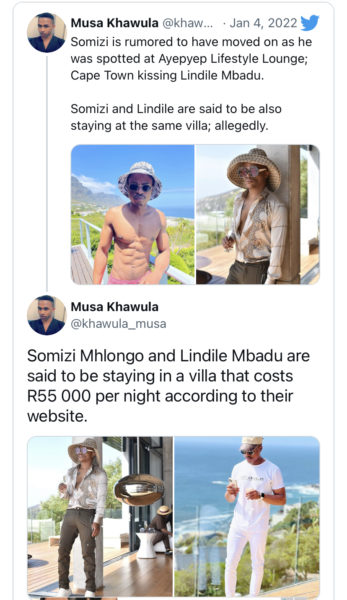